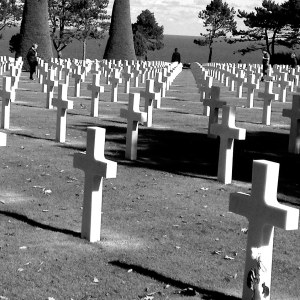 Decided to stay in Bayeux and do a day trip to the American Cemetery and Pointe du Hoc.

It’s the 100-foot cliffs that the Army Rangers scaled on D-Day while they were pelted with hand grenades and shot at by the Germans who were dug in on top of the cliff. The Germans were entrenched in these massive concrete bunkers that housed several big, deadly guns that the Rangers had to put out of commission. It was an impossible mission. And yet, they did it.

It was a rainy, overcast and drizzly day and it started coming down harder as I got to the little town of Colleville, just a mile or so from the American Cemetery. All the churches over here seem to be open during the day, so I sat inside the Colleville church, had a snack, and waited out the rain. Is it OK to eat inside a church? Hope so. Did it in a respectful and somewhat religious manner. The rain finally slowed to a drizzle and off I went to the cemetery.

This is the final resting place of 9,386 soldiers who died on or right after D-Day. The cemetery is a vast sea of 172 acres of perfectly manicured and startlingly green grass (the greenest grass I’ve ever seen) and 9,386 bone- white marble crosses and Jewish stars that seem to stretch on forever. They end at a stone wall that runs along the cliffs. From here, you can look down on the beaches where a lot of these guys died. It looks so peaceful now, but on June 6, 1944 it was total chaos, death and destruction all along these beaches.

It started raining again as soon I got to the cemetery, so went into the visitor’s center/museum to wait it out. An American couple were at the information desk and told the guy working there that the woman’s grandfather was buried here. This was their first visit to the cemetery and they needed some help finding the woman’s grandfather’s grave site.

The man behind the desk was kind and gracious and treated them as if they were D-Day veterans/heroes. He pointed to the computers around the corner, and told them they type in her grandfather’s name and it would them tell them the location of his gravesite.

“It will give you the section and the row, and you can find it using this map,” he said, handing them a map of the cemetery.

They walked over to the computers.

“Do a lot of people come to look for their relatives?” I asked the guy. “Oh yes, quite a few,” he said, adding I had just missed the ceremony on June 6, the 71st anniversary of D-Day.

“We used to get a lot of D-Day veterans who came to visit the graves of their buddies, but not too many anymore,” he said. “There aren’t very many World War II veterans still alive.”

Thanked him and wandered around the cemetery, walking slowly, trying to grasp the enormity of D-Day. Saw the American couple, off in the distance, in the middle of a sea of marble crosses. They stood there, holding hands, their heads bowed.

Off to Pointe du Hoc. And after a mile or so, came upon two women on bikes. One of them had a flat tire.

It was the back tire, of course.

They were Dutch, their names are Emma and Sophie, which don’t sound very Dutch to me. Then again, they’re the first two Dutch girls I’ve ever met. My guess is they’re in the 25-to-30 range. Their age isn’t important, but it’s the newspaper reporter in me: We always had to ask people their age, where they lived and include it in the story. Plus, I like trying to guess people’s ages. I’m pretty good at it and am rarely off by more than two or three years.

Emma and Sophie had rented bikes in Bayeux and were doing a day trip to Pointe du Hoc.

They had the wheel off Emma’s bike, but didn’t have the little plastic levers you need to get the tire off the wheel. Took mine out and was about to get started taking the tire off the rim when Emma grabbed the levers from me and had that tire off in like 12 seconds.

It was quite impressive.

“That’s quite impressive,” I said.

“We are Dutch, we ride bicycles all the time,” Sophie said. “And we can fix flat tires.”

They didn’t have a spare tube.

“I have one,” I said and fished one out of my front bike bag.

“Oh no, it’s my pleasure to help fellow cyclists.”

They thanked me profusely and Emma had the tube in the tire and the tire on the wheel in like three minutes. This was seriously impressive.

We rode together to Pointe du Hoc, where we saw the American couple from Dayton I met at the Family Home/Auberge de Jeunese last night. It was like a mini reunion. Introduced Emma and Sophie to Freddie and his wife (still can’t remember her name) and then we all wandered around Pointe du Hoc together. Was easy to imagine the Germans hunkered down here, the Allied planes dropping bombs on them (there are giant bomb craters everywhere) and how amazingly difficult and deadly it must have been for the Rangers to fight their way up these cliffs. About half of them didn’t make it.

My journalism instincts kicked in when we walked by the American couple I’d seen earlier at the American Cemetery. Needed to know the story of the woman’s grandfather.

“Excuse me. I saw you at the American Cemetery earlier today and heard you ask the guy at the desk to help you find your grandfather’s grave. I’m a reporter and I’m writing an article about biking in Normandy and was wondering if it’s OK to ask you a few questions.”

They said it was OK, and then told me the story of Steve Golas. That’s another thing I learned as a newspaper reporter: Most people are more than happy and willing to tell you their story. All you have to do is ask. Nicely.

BTW: Now feel obligated to write a story about biking through Normandy for some publication. Any publication. Even if it’s the Examiner. It’s one thing to lie to some college kid you meet in a youth hostel, but it’s another to lie to a couple whose grandfather was a D-Day hero. Really need to tell this story and get it published somewhere. Maybe it will be the start of my freelance writing career.

Steve Golas was an Army Ranger. He was in the first wave of landing crafts on D-Day, arriving a few miles to the east of Pointe du Hoc at a place called Pointe et Raz de la Percee. The Germans were on top of the cliffs at Pointe et Raz de la Percee, a few hundred yards from the edge of the water. They had a clear line of sight to the Rangers, and Steve Golas was hit as soon as he jumped out of the landing craft.

“We have met several of the Rangers who survived and knew my wife’s grandfather,” the husband told me.

One of them told them that Steve Golas had been promoted from platoon sergeant of C Company to first sergeant of the entire 2nd Battalion a day or two before D-Day.

“He didn’t have to go in on the first wave, but he begged and begged his commanding officer to let him go in with his buddies,” the husband said.

“He was a hero,” the wife said of her grandfather.

Rode back to Bayeux with Emma and Sophie, who are trauma nurses at a hospital in Amsterdam. Was tempted to tell them all about all my trauma, but decided not to. Don’t like to talk about it. They were staying at a hotel not too far from the Family Home/Auberge de Jeunese. They – and by they, I mean Emma – asked if I wanted to meet later at the café near their hotel. Was tempting, as they seemed nice enough and it would have been fun to talk to them and hear more about Amsterdam, and their bike-mechanic skills. Can’t be certain, but I think Emma might have liked me a little bit. She paid a lot of attention to me all day, asking me lots of questions and laughing at all my jokes. Sophie seemed to hang back and let Emma pay attention to me and laugh at all my jokes.

Had my bike gloves on the entire day, which means they – and by they, I mean Emma – couldn’t see my wedding band, which means there was no way she could have known I was married. OK, I know I’m not married, but you know what I mean. Then again, could be nuts and may have totally misread the entire situation. Emma could be a friendly traveler and just wanted to be friends. I’ve never really understood American women, let alone the Dutch version.

“It is the least we can do to say thank you for helping with our bicycles,” Emma said.

“Thanks, but I’m really tired and I’m gonna go to bed right after dinner,” I said. It was the truth. It had been a long day, and needed to rest my brain. Plus, I was a little scared that Emma, you know, kind of liked me. Not ready for that.

“If you change your decision, we will be at the café,” Emma said.

Dwayne was still at the youth hostel, and seemed even more nervous and intense than last night.

“Are you OK?” I asked after we had finished dinner.

That’s all it took, and Dwayne spilled his guts. It seems he had come to Paris a few days ago to meet up with his girlfriend, who had spent the spring semester studying there. Dwayne loves her very, very much. In fact, he brought an engagement ring with him, and planned to ask her to marry him when they were at the top of the Eiffel Tower. So, Dwayne gets to Paris, he’s so damn excited to see his girlfriend, what with him loving her so very, very much, and being all set to propose … and she goes and dumps him and breaks his heart. He’s not even there two hours and she tells poor Dwayne she doesn’t love him any more, she’s met someone else, some French guy, whom she may or may not love. Either way, she’s sure she doesn’t love Dwayne any more. It’s all over.

“Come on, I met some Dutch girls and they’re at a café a few blocks from here, let’s go have a couple drinks. My treat. Ever try pastis? It will take your mind off what’s her name.”

We found Emma and Sophie, and Dwayne spent the next two hours telling us all about his girlfriend, about how he was going back to Paris tomorrow to win her back. And maybe beat the crap out of her new French boyfriend. The poor kid. He doesn’t stand a chance.

Still think Emma was interested in me, but did my best not to encourage her. Hey wait, did she see my wedding band, since I wasn’t wearing bike gloves? She didn’t say anything, or ask me about my wife. Maybe she didn’t notice the ring. Or maybe she did – and didn’t care because she wasn’t interested in me in that way. Probably the second one.

BTW: Everything down there works. Have done a couple self tests, if you know what I mean. And, at some point, in the future, may want to have sex again. Hell, I’m only 34 and could live a long, long time. Or maybe I won’t live a long, long time, which, when you think about it, is even more of a reason to hook up with Emma. She’s attractive … and she’s Dutch.

Chapter 12: It was a dark and stormy night… in France